What is Rec Room? What parents need to know 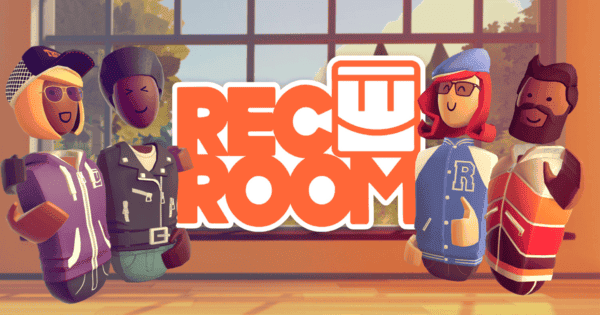 Rec Room follows in the footsteps of Roblox and other similar games. With this free cross-platform multiplayer video game gaining in popularity, it’s important to understand what it is and how children can stay safe.

What is Rec Room?

Rec Room is a free online multiplayer video game from America created in April 2016. Users can explore millions of player-created rooms and communicate with people from all over. Or they can create their own inventions (player-made items) to share with others.

Users can download Rec Room for free across platforms, including PC, Mac, iOS, Android, PlayStation, XBox and Oculus. Its first-person style of gameplay makes it a good fit for a variety of virtual reality (VR) headsets.

This style of gameplay also lends itself to a place in the metaverse, which surrounds the idea of creating virtual digital worlds and realities similar to real life. Learn more about the metaverse here.

What is Rec Net?

Parents can login to Rec Net to manage their child’s account as well.

Rec Room is open to users of all ages. However, users under the age of 13 are registered to a Junior Account.

Junior Accounts limit voice and text chat, the types of usernames children can have, where they can create inventions and inappropriate content such as ‘friendly fire’ options in Quests and player-made content with mature or scary themes.

What is the metaverse?

Rec Room downloads to any device from smart phones to VR headsets. As such, user can download in a variety of ways including directly from the website, on Steam, the Apple store or the Google Play store.

Once downloaded, users are also asked to install Easy Anti-Cheat. Easy Anti-Cheat is software designed to stop hacking and cheating in online multiplayer games. After users install both Rec Room and Easy Anti-Cheat, they create an account by selecting “Let’s Start”.

Players are then asked for their age. If they are under 13, they must enter a parent or carer’s email address. Under-13s automatically have a Junior Account and the game generates a username for them. They choose their own password.

It’s a good idea to go through setup with your child. This is because once they submit your email and their login details, the game asks for parents to confirm their email.

Once parents confirm their email, they receive their own username and password to login to Rec Net with. Here, they can change their password and monitor their child’s Junior Account.

Once the email is confirmed, the Code of Conduct comes on screen: 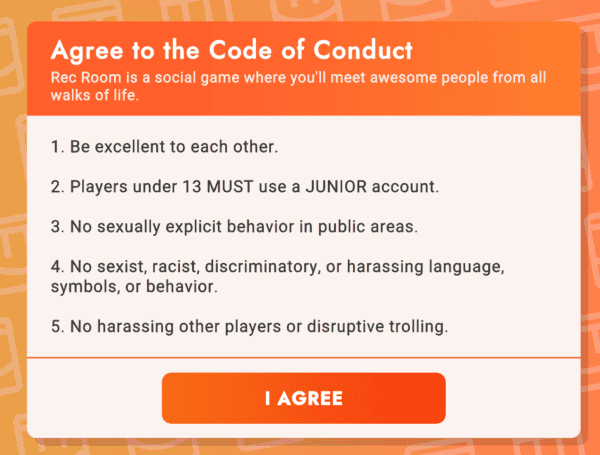 Once users agree to the code, Orientation starts loading. Here, children learn the game controls for their device and practise different interactions in what looks like a Recreation Centre. Players practice various activities like dodgeball, frisbee and archery before they start fully playing.

Throughout the Orientation, the walls are decorated with reminders from the Code of Conduct along with instructions. For example, they learn that using the ‘talk to the hand’ action mutes other players.

Once players make it through Orientation, they can go to their dorm, which is customisable, or they can explore player-created worlds.

A user with a Junior Account on Rec Room may be unable to join certain public rooms. If the content might be inappropriate for their age, they are not granted access. In public rooms they can access, they are unable to communicate with other users. The focus for Junior players is the fun of the game itself rather than socialisation.

Outside of the game itself, users can login to Rec.net for more experiences. Users can shop using in-game tokens as well as real-world currency. They can also more easily browse player-made content such as inventions, worlds and games. From here, users can select Rec Room games they want to play, which will open the Rec Room application.

Children with Junior Accounts do not have access to the Shop section of Rec Net. Their in-game spending can also be limited from the parent account.

Things to watch out for

Rec Room has not had much controversy in the news but as with any online multiplayer video game, it’s important to watch out for potential risks to children and teens.

Teens are not restricted in who they can talk to in Rec Room, so it’s important to talk with them about keeping personal information private. They should also be aware that people are not always who they say they are.

Explore our advice hub on grooming to know what to look for and what to discuss to keep your child safe.

Like many other online games, in-game tokens can be purchased and earned in Rec Room. Spending these tokens lets users customise avatars and dorm rooms among other things. It’s important to speak with your child about managing their spending online.

While Rec Room does what it can to limit inappropriate content, some may fall through the filters. Oftentimes, it might take a user reporting content on a platform for the moderation team to remove something.

Have regular conversations with your child about what they do and see in Rec Room or on Rec Net. This will help you stay on top of what they’re doing or seeing. Furthermore, ensure they know how to block or report inappropriate content by exploring the platform together.

Set parental controls
Was this useful?
Yes No
Tell us how we can improve it