Instagram features a number of functions to help your child manage who can see their content and how they interact with others. They can also use the reporting function to flag content that breaks community guidelines and upsets them.

What do I need?

Restrictions you can apply 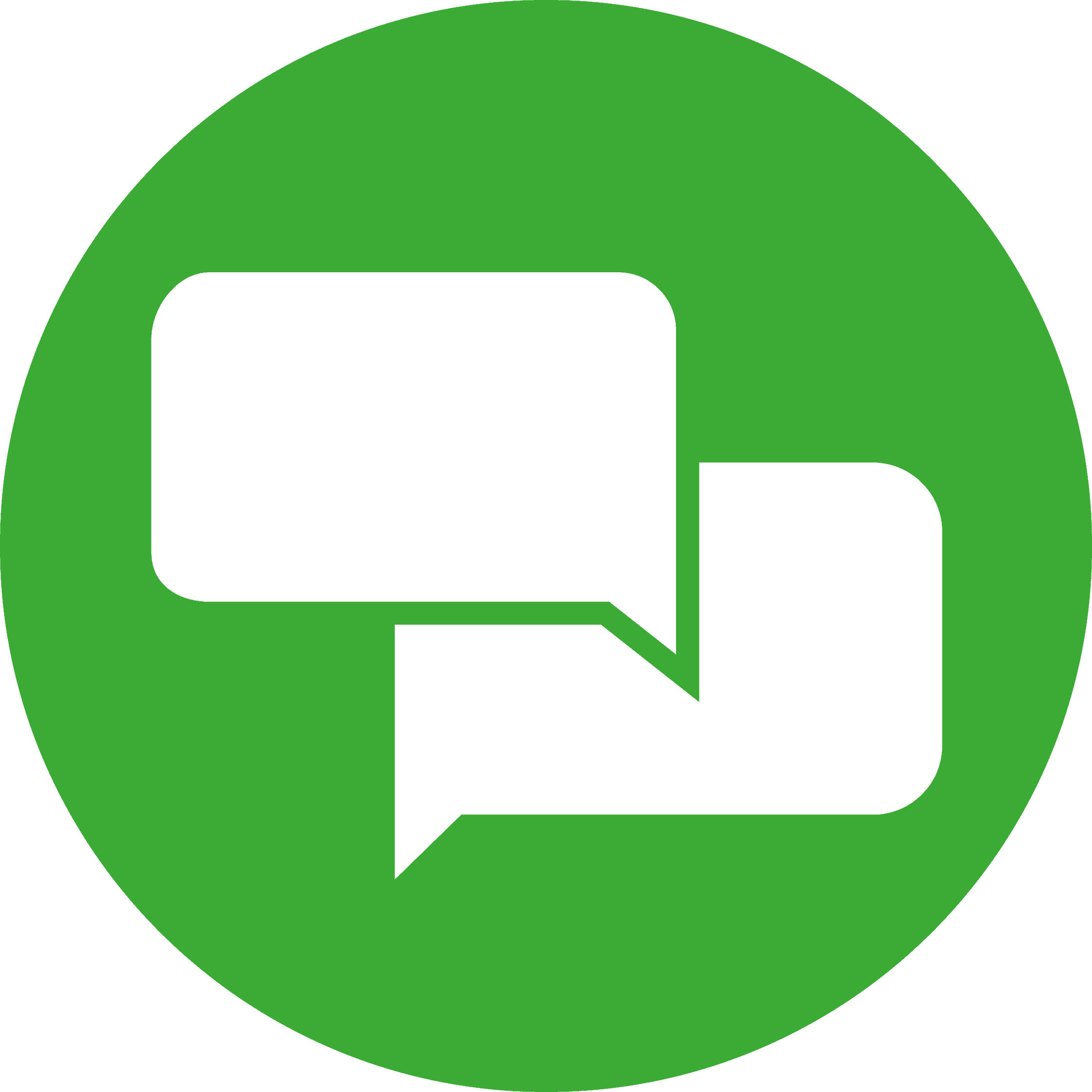 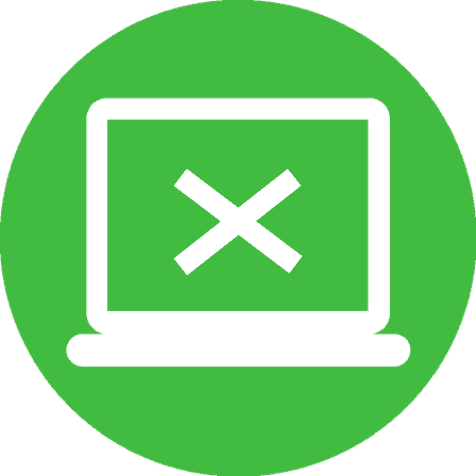 These steps were created using an Android smartphone:

How to set your account to private:
Step 1 – from your feed on the home screen, tap your profile picture in the bottom right to get to your profile. Then tap the 3 horizontal lines in the top right. 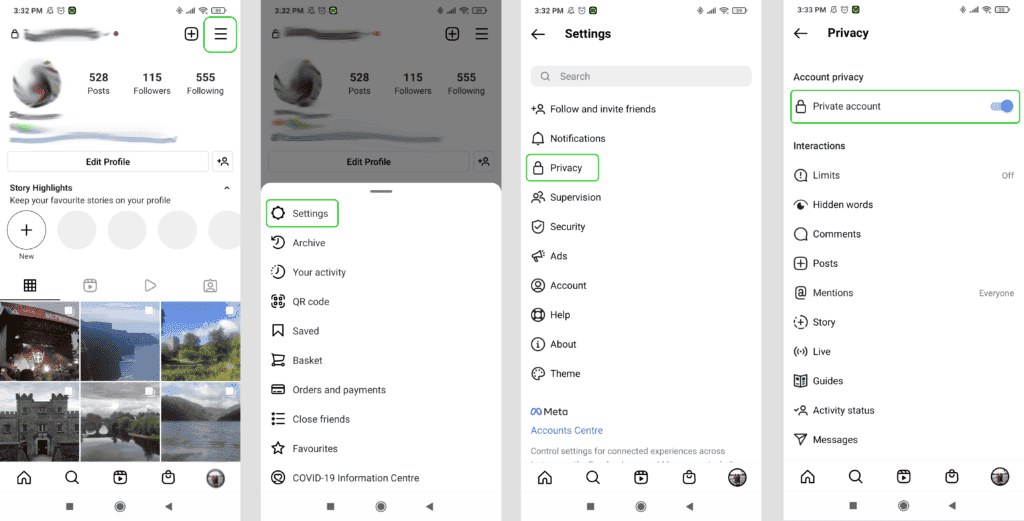 on the top right corner of the user’s post.

Step 2 – tap Report. Select the appropriate reason to submit a report. You can then choose to block, restrict or unfollow the user as well.

To report a user:
Step 1 – go to their profile by tapping on their username or searching for them.

Step 2 – select the 3 dots in the top right corner and tap Report… then Report account. Then select the reason to submit the report.

Reporting is totally anonymous. You can also use this Instagram form to make a report about bullying or harassment.

When you report on Instagram, it will be reviewed by moderators and they will take action if it breaks community guidelines.

If someone is in immediate danger contact the police or other local authorities. Blocking users stops you from seeing their messages and keeps them from finding your profile or its content on Instagram. They aren’t notified if you block them.

To block a user:

Step 1 – in your social feed, tap their username to go to their profile.

Step 2 – in the top right corner, tap the 3 dots and Block. You will then be asked if you want to block the account and any others they create or just that account. There is also an option Block and Report. Tap Block.

To add a user to your blocked users list:

Step 2 – you can unblock anyone here or tap the + in the top right to add another user. Search their name or username and tap Block. Choose whether to just block that account or any other accounts they may create. If you feel like you’re being targeted or harassed, you can turn Limits on to temporarily unwanted comments and messages.

Step 2 – choose who you would like to limit and for how long. You can limit Accounts that aren’t following you as well as Recent followers. Then you can set a time limit from 1 day to 4 weeks. Tap Turn on.

Note that this is not necessary for private accounts and users who have followed you for a long time will not be affected. To stop them contacting you, block or restrict their accounts. Restrict is a way to protect your account from unwanted interactions. If someone is being aggressive or negative in your comment section, you can put them on a “Restricted” list.

To restrict a user:
Step 1 – go to the user’s profile and tap the 3 dots in the top right corner.

Step 2 – tap Restrict. To unrestrict them, follow the same instructions and select Unrestrict.

You can also go to your Restricted list and add users manually:
Step 1 – go to your Settings > Privacy. Scroll to Connections and tap Restricted accounts.

Step 2 – search for the user you wish to restrict and tap Restrict next to their name. 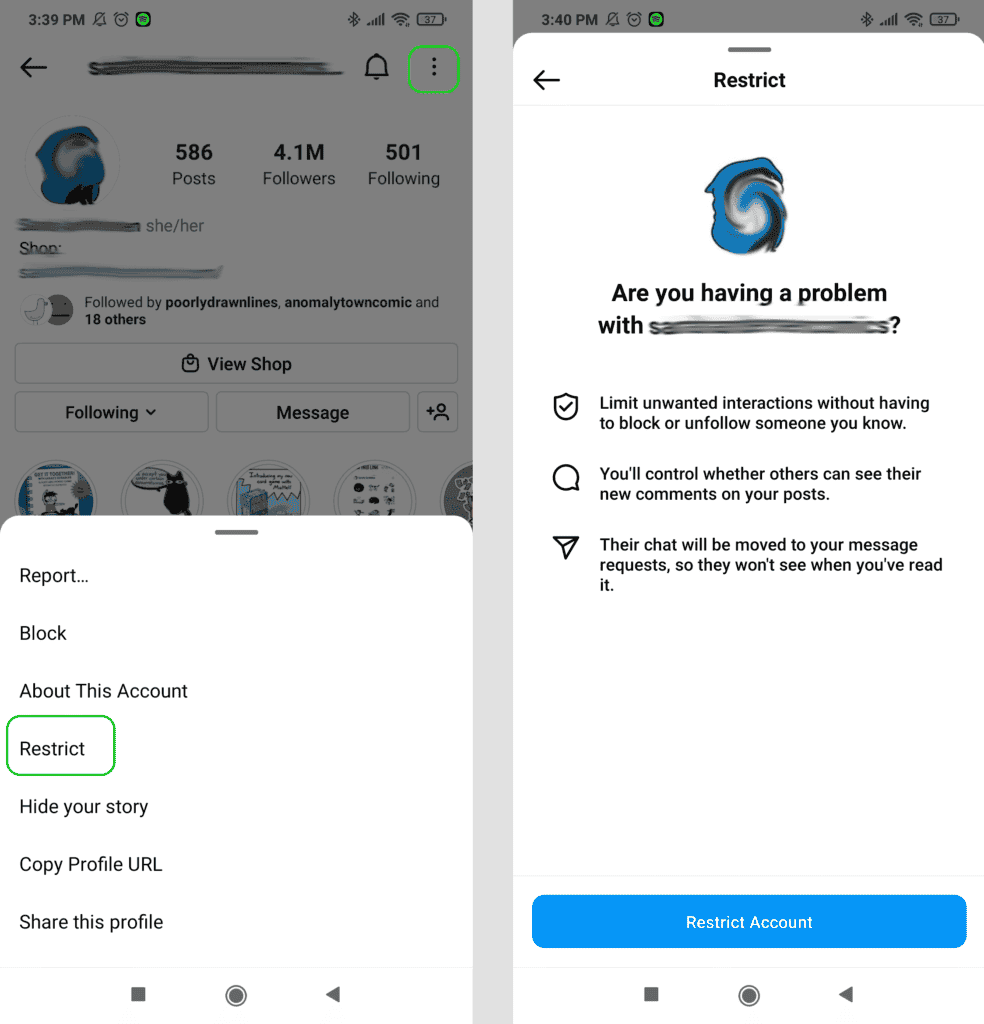 If you don’t want to see someone’s posts in your feed but don’t wish to unfollow them, you can mute them instead.

How to mute a user:
Step 1 – go to their profile and tap Following.

Step 2 – in the menu that comes up, tap Mute. Choose to mute their Posts and/or Stories here.

You can also do this by going to your profile and follower list. Tap the 3 dots next to the follower you wish to mute and then tap Mute. 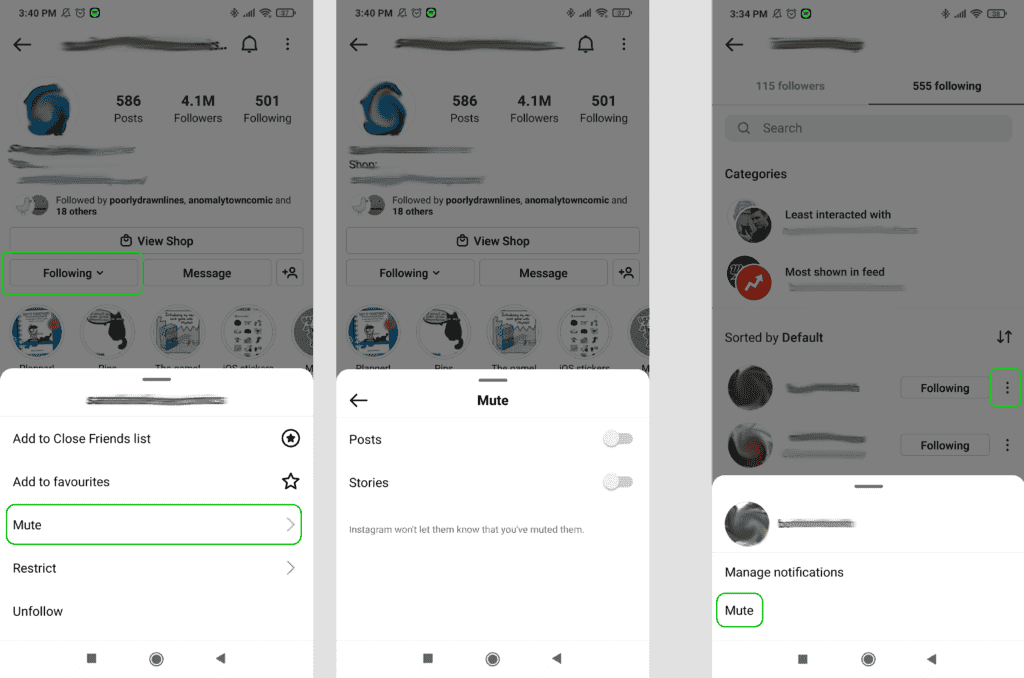 There are multiple ways to unfollow a user.

To unfollow someone from their post:
Step 1 – tap on the 3 dots in the top right corner of their post and select Unfollow.

To unfollow someone from their profile:
Step 1 – go to their profile by tapping on their username or searching for them.

Step 2 – tap Following in the top right corner and scroll or search for the user you wish to unfollow. Tap Following next to their name and Unfollow. You can allow or block comments from people you follow and your followers.

Step 1 – create a new post. Once you’re ready to submit, tap on Advanced Settings at the bottom of the screen.

Step 2 – under Comments, tap the toggle next to Turn off commenting. When it’s blue, no one will be able to comment on the posted picture.

To block specific users from commenting:

Step 1 – go to your profile and tap the 3 horizontal lines in the top right corner. Tap Settings.

Step 3 – search for the user you’d like to block from commenting and tap Block next to their name.

They will be able to comment and see their comments, but you won’t be able to see them. 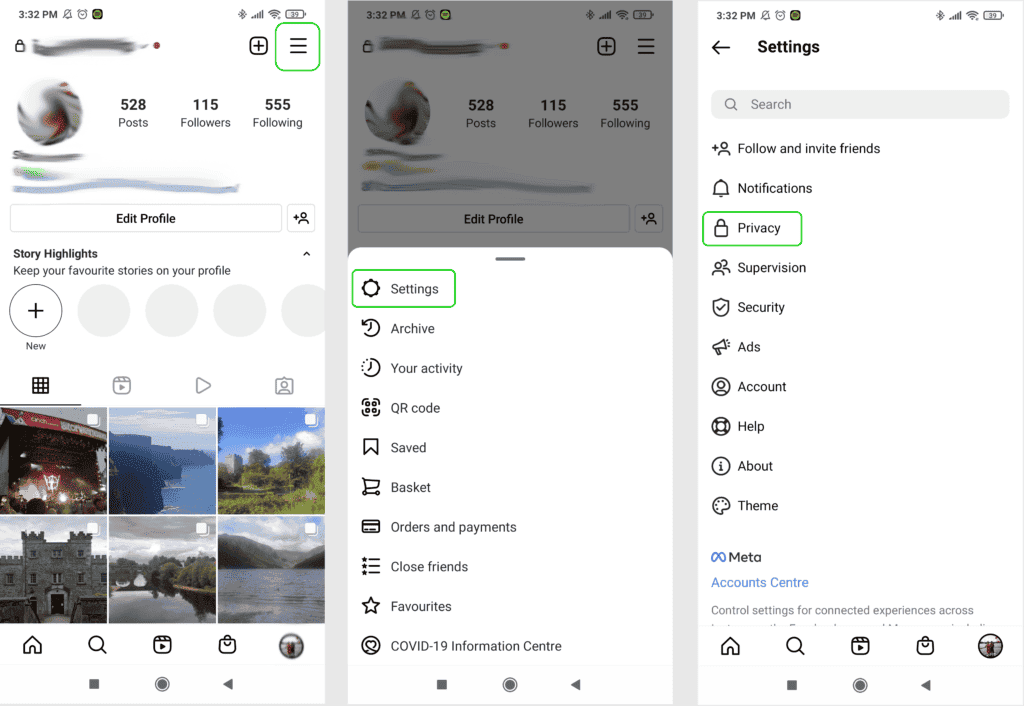 In addition to turning off comments or blocking users, you can also set up filters to hide inappropriate or offensive comments.

Step 1 – go to your profile and tap

Toggle on Hide Message Requests to filter out messages that may be offensive.

To hide chosen words or phrases that may be harmful or inappropriate to you:

Hiding likes and views on your posts can take away the pressure to get a certain amount of engagement by posting frequently. It lets users post what they want without any pressure.

To hide likes and views:

Step 1 – go to your profile and tap the 3 horizontal lines in the top right. Then tap Settings.

On this page, you can also manage who can tag you in their posts and stories. To limit who can call out your account, you can manage who is allowed to mention your account in their posts, stories, comments and live videos. When they try to mention you, they will see if you don’t allow mentions.

Step 1 – go to your profile > Settings > Privacy and then tap Mentions.

Step 2 – choose who you want the ability to mention you in their content. For young people, People you follow and No one are preferred for safety. 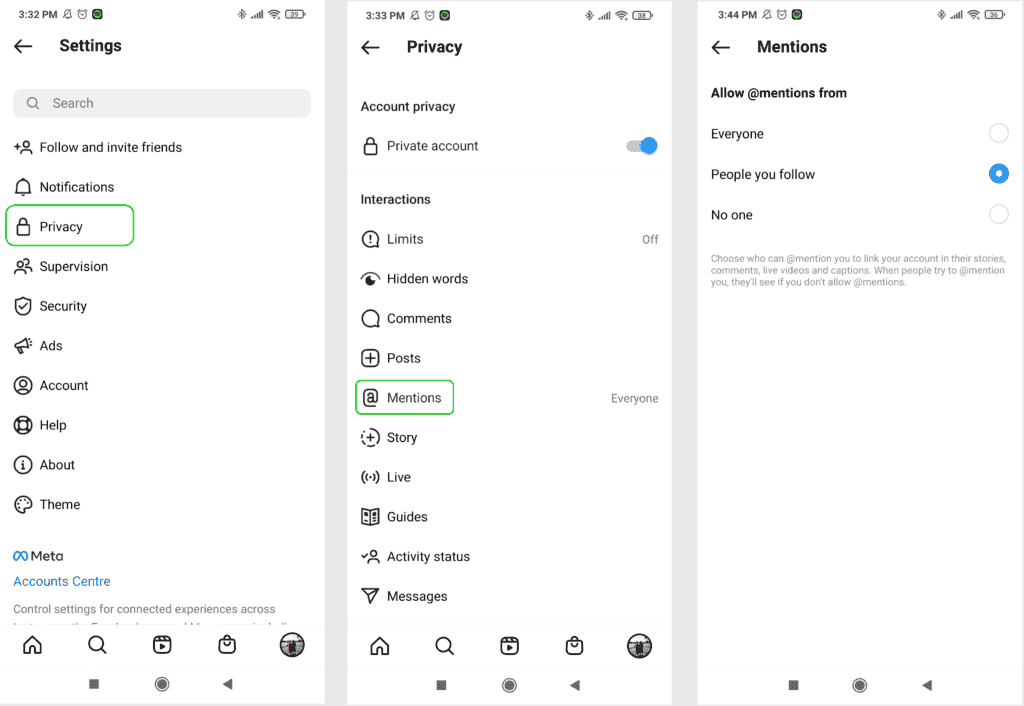 Choose who can view, reply and share your stories.

How to manage stories:

Step 1 – go to your Privacy settings and tap Story.

Note: users on the Hide story from list will not be allowed to view your Instagram live videos either. 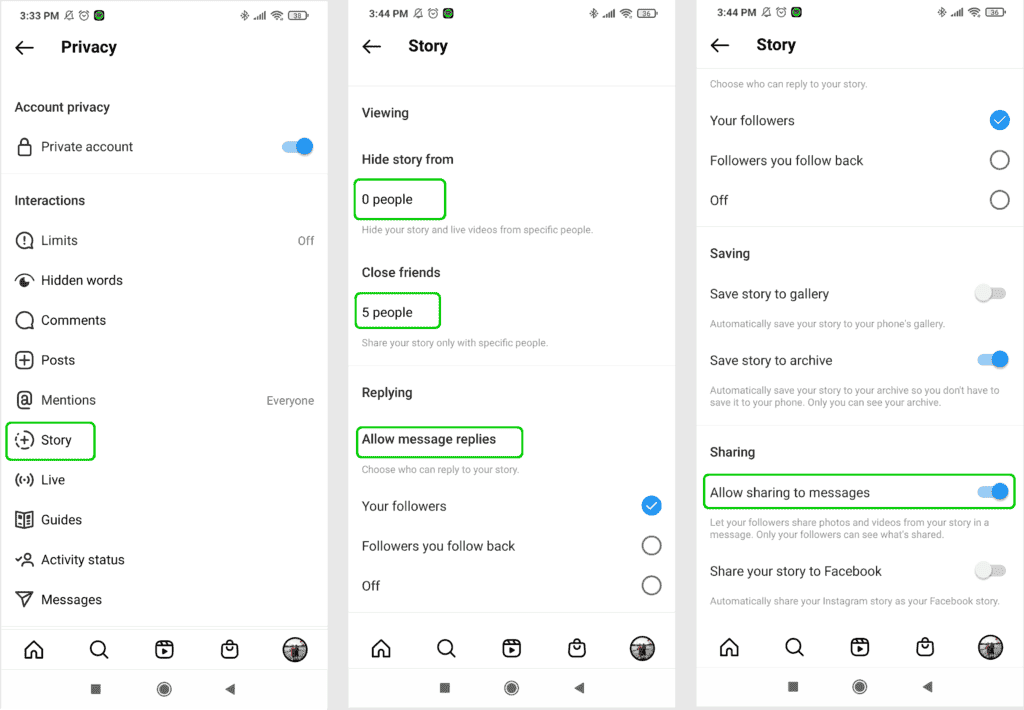 Manage time spent on the app

To limit how much time you or your teen are spending on the platform, you can set reminders and limits on the app.

Step 1 – go to your profile and tap the 3 horizontal lines in the top right corner. Tap Your activity.

Step 2 – tap Time Spent. From here, you can set reminders to take breaks, set daily use limits or review notification settings. You will receive messages and reminders from Instagram to take breaks if these options are set up. To limit how much you’re encouraged to use the platform or to help you take longer breaks, you can manage when and how you’re notified about activity on Instagram.

To manage all notifications:

Step 2 – you can Pause all notifications by tapping the toggle and selecting how long. This could be an option for school hours or bedtime.

You can manually manage notifications for Posts, stories and comments, Following and followers and more from this menu. You can use the “Close Friends” setting on stories so that only certain people see them. People who are unable to see the story won’t know that they are missing something.

Step 1 – go to your profile and tap the 3 horizontal lines in the top right corner.

Step 2 – tap Close friends and search for the users to add to the group or choose from the users listed under Suggested. Tap the circle next to their name to add them. Together with your child, you can manage privacy and security on the platform with Supervision.

To set Supervision up:

Step 2 – invite your child by following the instructions. Make sure you have a conversation with them about what you can do and why it’s important.

What you can do with Supervision:

o You can see how much time they spend on Instagram and set limits.

0 You can see the accounts they follow and who follows them.

0 You can receive notifications about their activity, including new followers and reports they make.

+ Announced in the US, Instagram is testing new age-verification methods beyond a physical ID. The two new methods include through taking a selfie where the technology identifies the user’s age or through social vouching. Social vouching is where users give permission for three people they are connected with to confirm their age. Steps are taken to ensure the accounts are legitimate sources. ID verification remains in place. While these options are only available in the US at the moment, Instagram hopes to roll it out worldwide with insight from how it is used in the US. Learn more here.

+ Family Centre, announced in March 2022, will now be available in the UK and other countries outside of America.

+ Parental supervision tools are being rolled out for Quest headsets. These include controls to manage purchases, block inappropriate content, keep on top of screen time and more. See full details here.

+ Sensitive content controls, released last year, can now allow users to regulate how much sensitive content may come across their feed. The three options are ‘more’, ‘standard’ and ‘less’ with the ‘more’ option unavailable to those underage.

+ Family Centre is launched in America. It allows parents to connect to teens’ accounts and monitor who they are interacting with while setting time limits for them. Teens also have the option to share with their parent when they report a user or their content.

+ Along with the Family Centre, Instagram has also released the Education hub. The hub has expert advice and articles to help families make the most of their time spent using the platforms. You can expect its release in the UK in the next coming months.

+ ‘Take a Break‘ was launched in various countries, including the UK. It reminds teens to take a break after they have been scrolling for a certain amount of time.

Use search to find device, platform and networks guides or let us know if you still can’t find a guide.