The Sims – What parents need to know 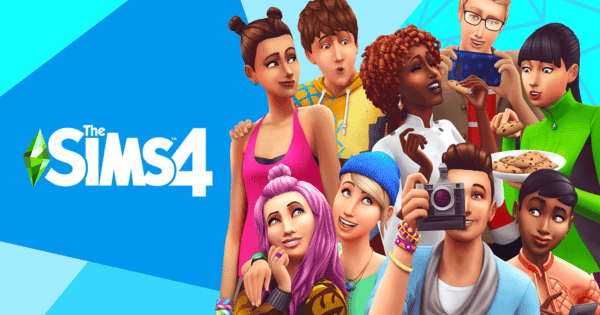 First launched in 2000, The Sims is one of the best-selling video game series of all time and currently has four franchises. The Sims 4 has almost 36 million players, so we outline what there is to know and how you can help your kids play safely and responsibly.

Overview of The Sims game

Created by Electronic Arts and developed by Maxis, The Sims was released in 2000. Since then, there have been four instalments in the series and various spin-offs and mobile versions of the game.

The Sims is a single-player interactive life-simulation game that gives you the power to create and control your own Sims character. You can create families, build homes, and complete various day-to-day activities such as sleep, eating, working, etc.

In 2014, The Sims 4 was released for purchase and in 2022, the base game was released for free download. There are 12 expansion packs, with the latest being High School Years, and 12 game packs (add-ons you can purchase for more gameplay).

There are also additional add-ons called Stuff Packs and Kits. Unlike the expansion and game packs, these additions offer new build items and Create a Sim (CAS) items rather than new gameplay functions.

Gameplay depends on the user’s play style. Some prefer to build in build mode while others like creating a storyline to follow in live mode. Career and lifestyle goals can be followed or ignored, which means the game can be tailored to suit anyone.

The Sims 4 game can be played on a PC (Microsoft/macOS), PS4 and Xbox One.

PEGI defines this rating: ‘Video games that show violence of a slightly more graphic nature towards fantasy characters or non-realistic violence towards human-like characters would fall in this age category. Sexual innuendo or sexual posturing can be present, while any bad language in this category must be mild.’

While there are online game elements (such as in the Gallery or Sims communities), The Sims 4 itself is playable offline.

What’s great about The Sims 4?

The Sims 4 is the best-selling and longest-running base game of the franchise, drawing in millions of players worldwide. Here are some reasons why it is so popular:

The Sims is relatively easy to pick up, understand and play as it doesn’t require much technical skill.

Players can customise sims, homes and neighbourhoods. They can also download game modifications (mods). Some mods include new features, objects and cheat codes while others simply fix in-game bugs. However, some may be inappropriate.

Influencers live stream and upload recordings of The Sims 4 gameplay. These videos and streams include builds, challenges and stories. Influencers like James Turner and lilsimsie have received hundreds of thousands of views for their videos.

The developers regularly release new content. Much of the new content is created by real-world designers, influencers and custom content creators. However, a lot of the content is paid-for, which has led to complaints from the Sims community.

The Sims have their own language called ‘Simlish’, which has gained popularity. It has even led to Katy Perry and other artists recreating some of their songs in the language!

The Sims team on Twitch

The game is also popular due to its 4.8m followers on Twitch. Their channel lets simmers watch live streams of the gameplay, learn about new game releases and updates and get other help with the game’s features.

Players might participate in challenges to make the game more interesting. Some are user-created like the ‘Harvest Moon‘ and ‘Legacy Challenge‘, which the Sims team adapted to include in-game. Users can now play a challenge with progress tracked by the game. It can add a layer of complexity and fun to the game for some.

The Sims 4 allows players to swap their real world for a virtual one filled with fantasy and imagination.

Content is generally suitable for ages 12 and up. However, there are certain things to watch out for:

Violence is limited to a ‘slapstick’ or cartoon humour. However, characters can be electrocuted by a plug, die in a kitchen fire or get crushed in a fold-down bed among other deaths. Therefore, it may be unsuitable for very young children.

Players can make Sims have sex (‘woohoo’ in Simlish), which happens under the sheets or in other hidden places, so no nudity is shown. Characters are censored when they use the bathroom or can be seen in their underwear.

If your credit card information is saved on your EA app or other account you use to play The Sims 4, it is very easy to purchase expansion packs, game packs, stuff packs and kits without always needing to confirm purchase details. Make sure to set spending limits and controls where possible.

Independent creators develop additional Create-A-Sim (CAS) or build mode items and gameplay functions that are not regulated by The Sims 4. This content is free and very easy to add into the game.

While some of this content includes different hair or furniture styles, other modifications include ‘realistic’ gameplay. This realism may include nudity, drugs, violence and other actions inappropriate for younger players. Custom content and mods are not available on the console version of the game.

Since its creation, The Sims has had four instalments of the game, five spin-offs and two mobile versions. Many are still available and played by fans of The Sims and have similar content warnings to The Sims 4.

Unlike other games in The Sims franchise, The Sims Medieval sends players and their royal sims on quests with a concrete storyline to follow. It was released in 2011 and has one expansion pack, Pirates and Nobles. The gameplay is quite different and may appeal to those who aren’t fans of The Sims. No other Sims game is required for The Sims Medieval.

Released in 2011, this mobile lifestyle game is still popular and updated regularly. It’s available on Android and iOS for free. In the game, players earn Simoleons (the currency in The Sims) and Lifestyle points, which can be used to move the game forward. There are also Social points available for purchase with real-life currency.

Based on The Sims 4, The Sims Mobile was released for Android and iOS in 2018. It features multiplayer elements and in-app purchases of SimCash, which is also earned through in-game quests. The microtransactions can also purchase additional items, so require extra diligence.

Child accounts limit access to features like online multiplayer modes, purchases and social media connections in the game and Origin app. Find out how you can create a child or teen account here.

If you play games on Xbox or PlayStation, your Xbox Live or PlayStation Network account has settings to control in-game purchases.

Set an alarm or use console or platform controls to help them better manage how much time they spend gaming. See our gaming how-to guides to get started.