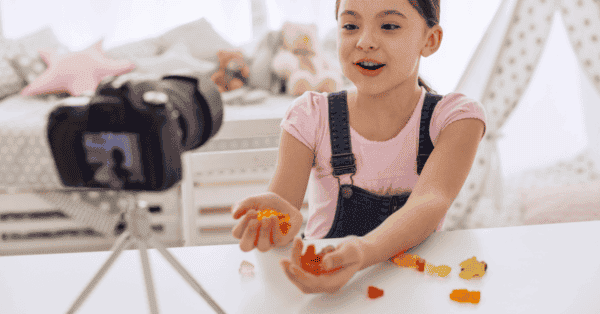 We are providing parents with new advice on the growing trend of live streaming among children in the UK – as a our study reveals how 30% of kids aged between 11 and 13 are broadcasting themselves live over the internet.

We’ve launched our live streaming parents’ guide in hope it will help parents understand the potential risks of their children posting live content on websites and apps amid fears it could leave them open to being targeted by strangers online.

Parents revealed that 27% of children aged between six and 10 are sometimes posting live content. Interestingly, nearly as many children aged four to five (13%) are live streaming their own content as those aged 14 to 16 (17%).

Interviews with parents revealed that children were less likely to vlog or live stream as they reached their older teenage years as they are more image conscious and are often too busy with other activities.

They said the phenomenon of live streaming was down to children being able to update multiple friends all at once. On top of this, live streams are less time-consuming to create and share.

In the study, parents said that YouTube is the most popular platform for kids to broadcast content on, followed by Facebook Live and Instagram Live. Others include Musical.ly, Live.ly, Live.me, and Periscope.  Our survey of parents of children aged between 4 and 16, also found a fifth of kids are viewing live streaming videos. Children aged 11 to 13 are the most likely (54%) age group to be watching broadcasts. 20% of four to five year olds are regularly watching content live.

The survey also looked at the extent children are making and viewing their own vlogs – which, in contrast, to live streams, are recorded and edited before being posted on social media platforms.

It revealed one in four (24%) kids create and post their own vlogs – including 27% of kids aged between six and 10 – although most child vloggers are aged 11 to 13 (35%). The average age for a child to start watching and creating their own vlogs is nine. Nearly eight out of 10 (79%) teenagers between 14 and 16 regularly watch videos by professional vloggers.

The average child spends two hours a week watching vlogs – yet 7% of kids watch for seven hours or more. Seven out of 10 parents say it’s difficult to know whether certain vlogs or vloggers are suitable for their kids.

Our new live streaming and vlogging guide ​ for parents to help them understand how kids are increasingly using online broadcasts as a method of communication and how they can get to grips with it.

Carolyn Bunting, CEO of Internet Matters ​ said: “Live-streaming is the latest online trend capturing the imagination of children growing up in a digital world.

“Our research shows that it is increasingly popular among younger children yet due to the speed at which technology develops, it remains unfamiliar territory for many parents.

“The internet provides children with fantastic opportunities to learn, explore and create however posting the wrong thing could pose potential dangers.

“It is essential parents are familiar with the potential risks and are helping their child build their digital resilience by ensuring they’re using age-appropriate platforms and encouraging them to think critically about the consequences of posting content online.

“Parents can do this by having regular, open and frank conversations about what they’re posting, what they’re watching and who they are sharing with.”Psychologist and Internet Matters Ambassador Dr Linda Papadopoulos said ​: “Live-streaming is another example of how kids have moved their lives online and are increasingly using digital platforms as a way of crowdsourcing their identity.

“Instead of exploring a passion to become a singer or dancer by putting on a performance for the family – kids can log on to different platforms and feel as though they have a ready-made audience.

“Parents need to understand what makes their child tick online and familiarise themselves with any app their child is using that may have broadcasting capabilities.

“But crucially they need to get behind the reasons they want to post content online – is it simply to explore a hobby or is it to gain attention or bow to peer pressure? If this is the case, they need to help them build their digital resilience and encourage them to navigate their digital world safely and responsibly.” See our guide to learn more about live streaming and vlogging, how children are using it to interact with others and what you can do to keep them safe while doing it.