1 in 5 children who have sent sexts, say they were ‘pressured or blackmailed’ 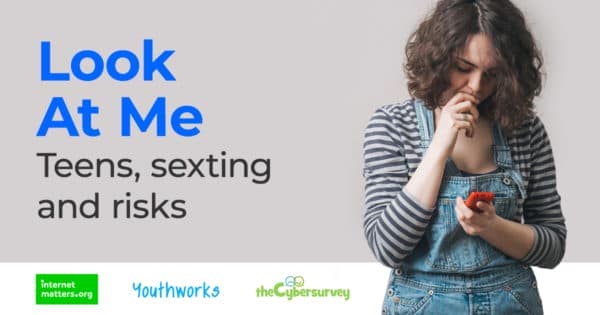 Nearly a fifth of schoolchildren, who have sent sexts said they were pressured or blackmailed into doing so, new research has revealed.

As part of the Cybersurvey by Youthworks*, 6045 young people answered questions on sexting, relationships and meetups. Among those young people aged 13+ who shared nude or explicit images, 18% said they were pressured or blackmailed into doing it.

Figures show that between the ages of 14 and 15 – the likelihood of a child sending an explicit image more than doubles.
4% of children aged 13 said they had sent explicit images of themselves, this rises to 7% aged 14 and at age 15 and over, this doubles to 1 in 6. (17%).
Boys are marginally more likely to share images (7%) versus girls (6%). Those who didn’t want to state their gender – 6% of the entire study- were the most likely (15%) to send explicit images

While too many children are blackmailed or pressured – 15% of 13-year-olds said they were pressured into sending the images – this rose to 17% of 14-year-olds and 23% of those aged over 15; figures also showed that many share because they want to.

The top reasons for engaging in sexting included: 38% who sent images because they were in a relationship and wanted to; 31% who tried it for fun; 27% who said it was because ‘I looked good’ and 19% who said ‘I wanted to see the reaction I got from the other person’.

The research also highlighted those young people who were already vulnerable offline were consistently more likely to have shared sexual images.

Those with mental health issues are nearly twice as likely to send explicit images (12%) compared to those with no issues (6%).

Children who experience a range of other vulnerabilities are also significantly more likely to send images including 23% of those who have an eating disorder, 20% of young people with a long-standing illness, 16% with hearing loss,16% of those with autism and 15% who experience speech difficulties

When it comes to the consequences of sexting, nearly 8 out of 10 children didn’t face any consequences after sharing images (78%), which may have led them to disbelieve traditional online safety advice.

However for others, the consequences were devastating,

One in six children (17%) had their image shared without their consent, 14% were bullied or harassed, while a further 14% were pressured or threatened to send more images.

Figures also showed that children who shared images are five times more likely to come across explicit images they didn’t search for online (35%) compared to those who have never shared images (7%).

Internet Matters CEO, Carolyn Bunting said: “For children who send images and face consequences, the effects can be devastating and can potentially lead to long-term damage to their emotional wellbeing.

“And as society’s most vulnerable are disproportionately likely to send images, it’s crucial young people experiencing vulnerabilities are being fully supported by their parents who understand the pressures to send images that some of these children face.

“Prevention is key here – so it’s essential that parents and carers tackle sexting head-on with their child – however awkward they may anticipate the conversation to be – as it key to keeping them both safe and emotionally healthy.”

Internet Matters ambassador and psychologist Dr Linda Papadopoulos added: “Young people may think ‘sending nudes’ is harmless, however, it’s essential we look at the reasons why children send explicit images and what purpose they feel it serves.

“Is it because they consider it to be part of a relationship? “If so, what are their expectations of respect and relationships. “Is it for validation? If so, why is a child’s self-esteem based fully on their looks, where does their value lie?

“Fundamentally children are sending images because ‘they want to’ and addressing the reasons why they want to – as part of a bigger conversation at home and with professionals will lower the chances of children facing potentially damaging consequences.”

Youthworks Director, Adrienne Katz said: “These teenagers have told us about their lived experience. It is time for a new approach that understands their motivations and the pressures to share images. Exploring healthy relationships and consent must be included in online safety education.

“This report should also provide a wake-up call to teachers and professionals to see sexting is as a red-flag behaviour which triggers intervention and supportive conversations because we found that those who are sharing nude or explicit images, also encounter other high-risk situations online.

“We have to get better at providing relevant online safety education – in and out of school.”

For more information on how to address sexting with your child visit https://www.internetmatters.org/issues/sexting/

NOTES FOR EDITORS
Research and Data from the report ‘Look at Me – Teens, Sexting and Risks’. Derived from The Cybersurvey 2019 by Youthworks in partnership with Internet Matters

About Cybersurvey by Youthworks
The annual Cybersurvey by Youthworks, explores the rapidly changing lives of young people in the digital environment, tracking trends, advantages and emerging concerns. Data is collected from 11-16-year-olds in schools, colleges and alternative provision every autumn. A few 17-year-olds participate. A youth participation model helps shape the questionnaire and schools are encouraged to debate the results with young people. Local authorities and children’s services use the data to target their efforts and evaluate their services.

*14,944 young people took part in the survey during 2019. Of these, 6,045 respondents aged 13 and over answered questions on relationships, meetups and sexting. A limitation is that the sample omits those not in education. In common with all earlier samples of The Cybersurvey, there are more respondents aged 11-13 than 13-16 and over, due to the year groups school choose to include. However, this large sample provides unique insights for services and policymakers where the focus is on early prevention and support and for those concerned with younger teens becoming caught up in digital relationship problems. The focus on vulnerable groups will be of use to planners and services.

About Internet Matters
Internet Matters (internetmatters.org) is a not-for-profit, industry-funded members body that helps families stay safe online, providing resources for parents, carers and educational professionals. It was established in 2014 by BT, Sky, TalkTalk and Virgin Media and its members include BBC, Google, Samsung, Facebook, Huawei, ByteDance, Supercell and ESET. It is a member of the Executive Board of UKCIS (UK Council for Internet Safety) and was a member of The Royal Foundation Taskforce on the Prevention of Cyberbullying, founded by the Duke of Cambridge. It works with partners from across the industry, government and third sector to raise awareness and provide advice on the issues affecting children in the digital age, including cyberbullying, screen time, digital resilience, extreme content, privacy and exploitation.

Look At Me – Sexting Report