Is Among Us multiplayer game safe for children?

Among Us is popular among online games children and young people in the UK and around the world us. Learn what it is, how it works and what you should watch out for to keep kids safe in the game.

What is Among us?

Among Us is an online multiplayer game rated PEGI 7+ that allows a maximum of 10 players to take on the roles of a ‘Crewmate’ or ‘Imposter’. The aim of the game is for the Crewmates to identify the players who are the Imposters in the game. The Imposters in the game have to secretly sabotage the tasks on the ship and kill the Crewmates before they finish their tasks.

What is good about the game?

It promotes communication and teamwork to achieve the end goal of finding the Imposter. It also features a thrill for the Imposters, who are trying to hide their identity. The same goes for Crewmates, who need to clear their name so they are not voted out and have to do their tasks while their life is on the line.

Why is it so popular with young people?

Statistics on Twitch show that over 25 million hours of Among Us streams were watched between August and October 2020. So why is it so popular?

It’s simple to play, ‘extremely social’ and involves a lot of teamwork and interaction with others which is the key ingredient for success of other multiplayer games. There is a level of customisation of the avatars and the game itself. It can also be played across a range of platforms (PC and mobile).

What features does it have?

Users can use this feature to set up a game where it gives them the ability to customise the game’s theme, the number of Imposters in the game, and who can be blocked or removed from the game. This option also generates a code that can be shared with other players to give them access to the game if it set to be private (where you can only access it with a specific code given by the host) rather than public (open to everyone). Setting up a game in Among us as the Host.

This allows users to join games that are set as public (available for everyone to join). Only 10 players can join each game before the game has started. This does mean that children may interact with a lot of users they don’t know. Among us game screenshot of Host, Public and Private options. The search function on Among Us to find games that are public.

Private and public settings in the game

To limit potential interaction with strangers, setting games to private and requiring users to have a code to play is a safer option. This will mean that if a child wants to play with their friends, they will have to send the code to friends through other platforms. 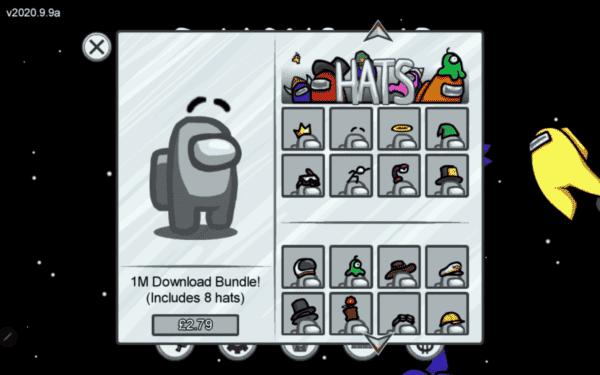 At the end of each game, or when a player is killed off in the game, they are served up an ad before they can start another game. However, if you are willing to pay £1.99, you can remove all the advertisements.

The free-text chat service has filters that remove bad language and personal information. It is used to communicate about who the Imposter might be. The random text chat means strangers can’t contact your child unless actively playing. It isn’t usually a way to meet new people online, so remains relatively safe. For children of a certain age, their interactions are limited even further. 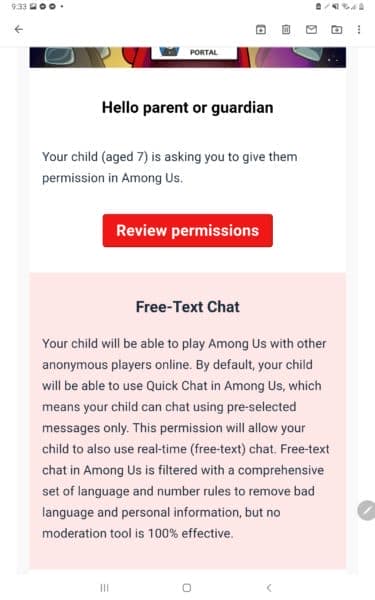 The game can take place in one of three settings – a spaceship (The Skeld), an imaginary planet (Polus), or the headquarters (Mira HQ).

While Crewmates are asked to complete a list of tasks, the Imposter blends in and takes out Crewmates one after another. When a player reports a dead body, killed by an Imposter, a discussion is called for them to vote on who they think is the Imposter.

When people have voted, the result is shown and if the wrong person has been chosen no Crewmate is removed or ‘ejected’ from the ship. Sometimes, the players can call emergency meetings, which there are a limited number of. 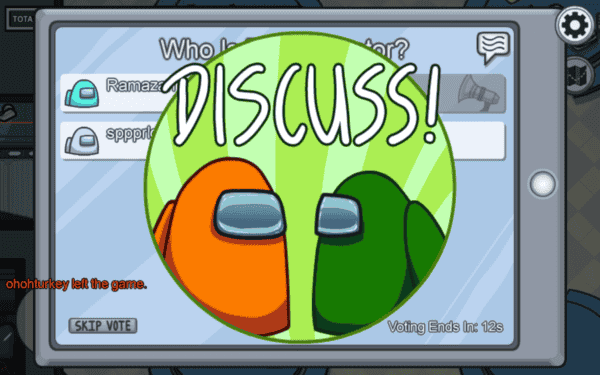 Screenshot of Among Us discussion in-game

Some players have to lie to keep their Imposter identity secret. The aspect of teamwork comes in where each player can use the in-game chat function to communicate their reasons for choosing a particular player or defending why they are not the imposter.

For the Imposters to win the game they have to sabotage the countdown run out or take out a number of the Crewmates so there is an equal number of Imposters to Crewmates. Those who are taken out of the game are before the end, can still help their teammates as ‘ghosts’. 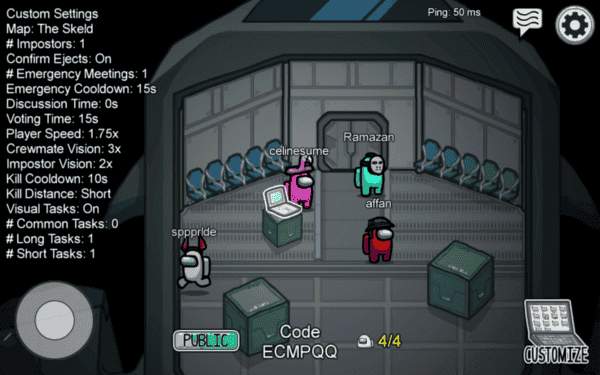 Example of Among Us game.

Use of other chat functions

In addition to the chat function in the game including the Free-Text Chat mentioned above, players can also use Discord servers to talk to each other in the game. However, if you are playing on a mobile and joining a public game you will not know that the other players are chatting on Discord until the game has started. This can present an unfair advantage as some players will not be included in the team discussions being had on the Discord server.

What should parents be concerned about?

Talking to strangers in the game

If your child is playing a game that is set to public, they may meet and chat with people they don’t know which could put them at risk.

Although you can use the censor filter to block out bad language, it does not block everything and there are words that are not picked up by the filter. So, despite this feature, there is the potential that children can be exposed to inappropriate content.

Are there any safety features?

Parental portal
Innersloth has added a Parent Portal – although it’s not mandatory to create an account, some features will be locked if you decide not to. The safety measures aim to make Among Us safer for everyone and, especially, kids 13 and under. 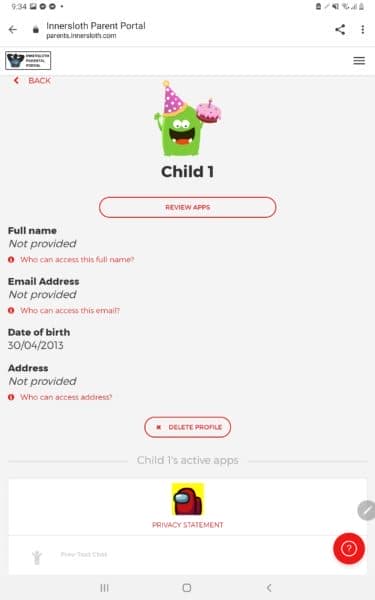 Permissions
Children are under the age of digital consent (13 in most countries) will need permission from a parent or guardian to access free chat, create an account, or change their display name. 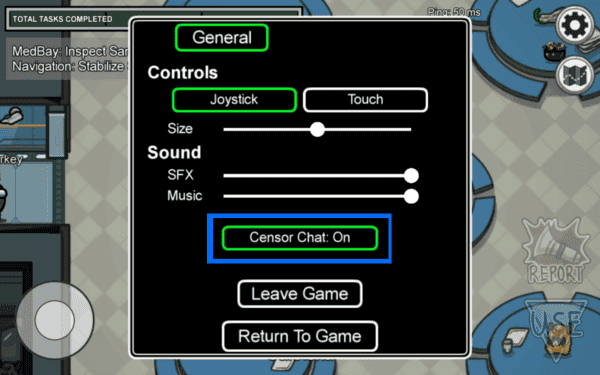 Switching off chat function on Among Us

To limit interactions with strangers, you can encourage children to set games to private and only allow people they know into the game.

If a player does become an issue the only person who can remove them is the Host. This does mean that all the players have no option but to rely on the Host to take action if something goes wrong in the game. Among Us – Quick chat feature

According to Among Us, the new chat text: ‘Quick chat’ feature is meant to be a ‘faster and safer alternative to open text chat’. The free chat option is still available, but if a child is under the age limit to play Among Us (under 13)  the Quick chat option is for them.

Ratings – what you need to know

Among Us was originally rated PEGI 16 when it was released in June 2018. However, following an increase in interest in the game, it was reclassified as PEGI 7+ following another review of the game by the VSC Rating board. In the Apple App Store, it has also been listed as suitable for ages 9+.

Based on the PEGI rating, the game may “contain some possibly frightening scenes or sounds. Games can show violence as long as it’s unrealistic and directed towards fantasy characters. There may be some non-realistic violence towards people or violent actions (e.g: bombing of cities or non-human targets).”

Among Us does contain some cartoon violence as the Imposter character is instructed to take out the Crewmates on the ship. However, it’s not graphic or pointed towards real people.

Tips to keep children and young people safe in the game

Like what we do? Want to support our work?

Among Us Code of Conduct