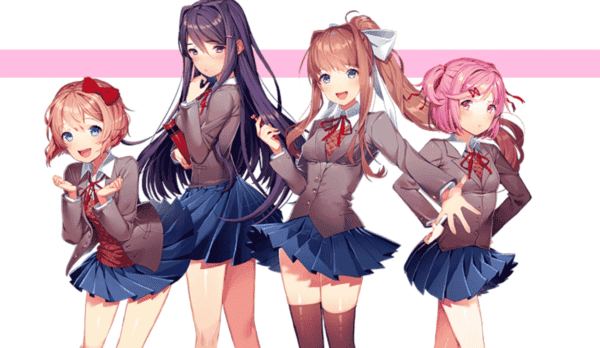 Doki Doki Literature Club is a game for PC and Mac. It has been in the headlines because, although it looks like a dating game, it has a dark twist about 90 minutes in. Suddenly the characters start killing themselves.

During this process, suicidal images are shown with one girl stabbing herself, and another committing suicide by hanging. There little narrative warning of these events that come out of the blue for the player.

Contrary to newspaper reports, the game does not send messages to your phone and is not played online.

Why No PEGI Rating?

Because the game does not have a physical release it doesn’t legally require a PEGI rating to be sold. If it was sold on Xbox, PlayStation,  Nintendo or Android online stores it would need a PEGI or ESRB rating because those platforms voluntarily enforce the rating. If it was on the App Store it would have an Apple age rating.

Because the game includes adult language it would get at least a PEGI 16 rating if it was released on these platforms or sold in physical form.

On Steam this isn’t the same. However, it is listed as Psychological Horror, Visual Novel, Dark, Gore, Violent and Sexual Content.

The game page also states that “This game is not suitable for children or those who are easily disturbed”. When you start the game this is re-stated and you are required to confirm you are aged 13 or older.

Are There Parental Controls?

You can turn on Family Settings on your Steam account by:

Another aspect of the game which makes it easier for children to play is that it is free. There are in-app purchases for £6.99/$6.99 that unlock optional extras but the main game can be played without the requirement to make an online purchase.

Ensure you have your Steam account set-up to an email address that you check regularly as this will inform you each time a new purchase is made. You should install and set up the Steam app on your smartphone (iOS or Android) as this will provide notifications of purchases and let you keep an eye on activity.

Although Doki Doki Literature Club’s bait and switch story-telling can result in players playing the game without realising how it may trigger mental health issues, for those of an appropriate age who are aware of the themes ahead of time it can offer a helpful way to discuss mental health issues.

Games are particularly good at this as they offer players the chance to explore emotions and experience life through the eyes of other characters.

Other games that do this for different age groups are:

A game of metaphorical woodland landscapes. You traverse the landscape looking for “passion objects” to help overcome emotional obstacles. It’s designed to help with depression as a meditation on the meaning of passion and fulfillment.

This is an adventure narrative where your character lives with depression. You have to balance their mental blockages, job, relationships and even treatment in some scenes. Robin is a short slice of life game that was made to give some visibility to an invisible illness – Chronic Fatigue Syndrome.

A fairy tale about growing up that tackles life’s mundanity as well as important relationships. Although each character is an animal, they are surprisingly human and offer a substantial way to discuss the complex messy nature of life.

Oxenfree is a 3rd person single player game that’s equal parts coming-of-age tale and supernatural thriller. You play as Alex, a bright, rebellious teenage girl who brings her new stepbrother Jonas to an overnight party on a decommissioned military island.

A desert landscape is explored and found to be largely empty. But as you continue your quest other online individuals join you and transform the experience into something human and collaborative. The power and importance of sharing a journey with other people, even if they are strangers, makes this a really useful game to meditate on wellbeing.

A game where you control the breeze to direct a flower petal around a landscape. What opens up into an expansive world to explore with beautiful landscapes and tranquil music. This is a really good game to relax and escape the day to find calmness.